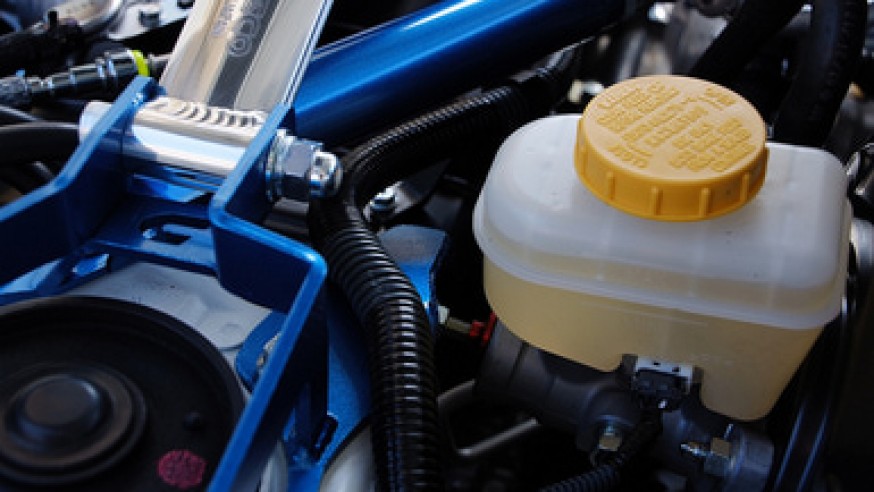 Traditional brake systems use hydraulic pressure to generate the force necessary to slow down and stop cars and trucks. These systems are operated by a brake pedal that activates a hydraulic component known as a master cylinder. When the master cylinder is activated, it generates hydraulic pressure in the brake lines. That pressure subsequently acts on the slave cylinders present in each wheel, which either pinch a rotor between brake pads or press brake shoes outwards into a drum.
Modern hydraulic brake systems are more complicated than that, but they still work on the same general principle. Hydraulic or vacuum brake boosters reduce the amount of force the driver has to apply, and technologies such as anti-lock brakes and traction control systems are capable of automatically activating or releasing the brakes.
Electric and electro-hydraulic brakes have traditionally been used only on trailers. Since trailers already have electrical connections for brake lights and turn signals, it’s a simple matter to wire in an electro-hydraulic master cylinder or electric actuators. Similar technologies are available from a couple of OEMs, but the safety-critical nature of brakes has resulted in an automotive industry that remains hesitant to adopt brake-by-wire technology in any real capacity.
Electro-Hydraulic Brakes
The current crop of brake-by-wire systems uses an electro-hydraulic model that isn’t fully electronic. These systems still have hydraulic systems, but the driver doesn’t directly activate the master cylinder by pressing on the brake pedal. Instead, the master cylinder is activated by an electric motor or pump that is regulated by a control unit.
When the brake pedal is pressed in an electro-hydraulic system, the control unit uses information from a number of sensors to determine how much braking force each wheel needs. The system can then apply the necessary amount of hydraulic pressure to each caliper.
The other main difference between electro-hydraulic and traditional hydraulic brake systems is how much pressure is involved. Electro-hydraulic brake systems typically operate under much higher pressures than traditional systems. Hydraulic brakes operate at around 800 PSI under normal driving conditions, while Sensotronic electro-hydraulic systems maintain pressures between 2,000 and 2,300 PSI.
Electromechanical Brakes
While production models still use electro-hydraulic systems, true brake-by-wire technology does away with hydraulics entirely. This technology hasn’t shown up in any production models due to the safety-critical nature of brake systems, but it has undergone significant research and testing.
Unlike electro-hydraulic brakes, all of the components in an electro-mechanical system are electronic. The calipers have electronic actuators instead of hydraulic slave cylinders, and everything is governed directly by a control unit instead of a high pressure master cylinder. These systems also require a number of additional hardware, including temperature, clamp force, and actuator position sensors in each caliper.
Electromechanical brakes also include complicated communication networks since each caliper has to receive multiple data inputs in order to generate the proper amount of brake force. And due to the safety-critical nature of these systems, there typically has to be a redundant, secondary bus to deliver raw data to the calipers.
The Sticky Safety Issue of Brake-by-Wire Technology
While hydro-electric and electromechanical brake systems are potentially safer than traditional systems, due to the potential for greater integration with ABS, ESC, and other similar technologies, safety concerns have held them back. Traditional brake systems can and do fail, but only a catastrophic loss of hydraulic pressure will completely rob the driver of the ability to stop or slow down, while inherently more complex electromechanical systems have a multitude of potential failure points.
Failover requirements, and other guidelines for the development of safety-critical systems like brake-by-wire, are governed by functional safety standards like ISO 26262
Who Offers Brake-By-Wire Technology?
Redundancy and systems that are capable of working with a reduced amount of data will eventually make electromechanical brake-by-wire technology safe enough for widespread adoption, but at this point only a couple of OEMs offer electro-hydraulic systems.
Toyota first introduced an electro-hydraulic brake system in 2001 for its Estima Hybrid, and variations of its Electronically Controlled Brake (ECB) technology have been available ever since. The technology first appeared in the US for the 2005 model year with the Lexus RX 400h.
Mercedes-Benz also offers an electro-hydraulic brake system, which is called Sensotronic Brake Control (SBC). This technology was also introduced for the 2001 model year, and it is still available for luxury models like the SL-Class.