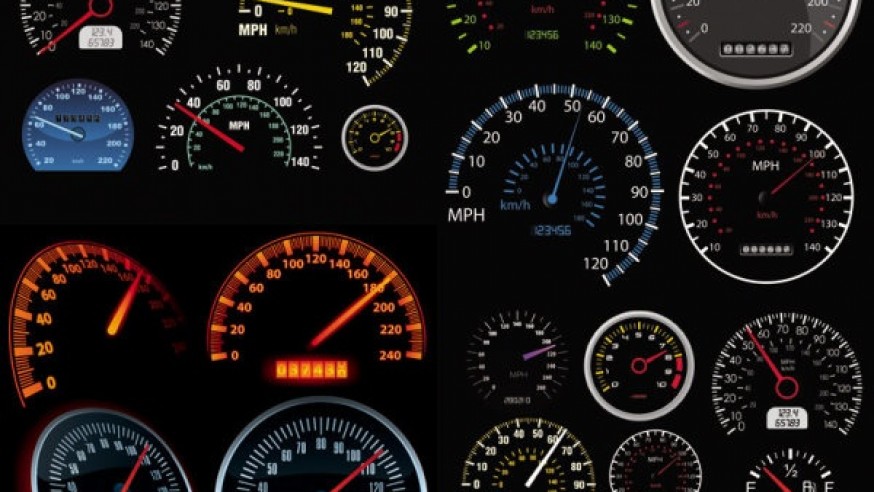 The Difference between an Odometer & a Speedometer

The odometer and speedometer in your car are typically housed as a single instrument, though each has a unique function. If purchasing an independent device for use on something other than a car (for instance, a bicycle), then these may be separate instruments. These devices record their information in miles in the United States.
Odometer
A device used to measure distance; it operates by recording wheel rotations. There are so many rotations, depending on the diameter of the wheel, in each mile. When this number of rotations has been reached, the counter clicks over, recording a mile. When these instruments were first introduced in motorized vehicles, the counters contained five digits; now they contain six. When the miles are maxed out at 999,999, the counter rolls back over to zero.
Speedometers
Appearing like a dial positioned above the odometer counter in the vehicle dash, the speedometer measures the speed of the vehicle. It is thought that the early Romans used marks on the wheels of their chariots to measure and calculate their speed and distance. Today, applications are much more high tech, implementing the use of cables, sensors and magnets, or, in the case of even newer electronic systems, techs generators are used to measure the speed of the moving vehicle.
Calibration
In order for speedometers and odometers to serve their purpose, they must all measure speed and distance in the same way. For this reason, the government enforces strict quality control measures, not only on all the individual components of these instruments, but also on their calibration. Electronic calibration ensures that each instrument measures speed and distance similarly, no matter where it is installed.
Application
Making good use of speedometers means paying attention not only to what the readout is telling you about your travel, but also to the traffic laws and speed limits where you drive. The odometer is helpful in letting you know when it is time for scheduled maintenance, as this happens about every 3,000 miles; it also lets you know the mileage on your vehicle, such as at purchase time, or can be a handy tool for measuring any distance from point A to point B.