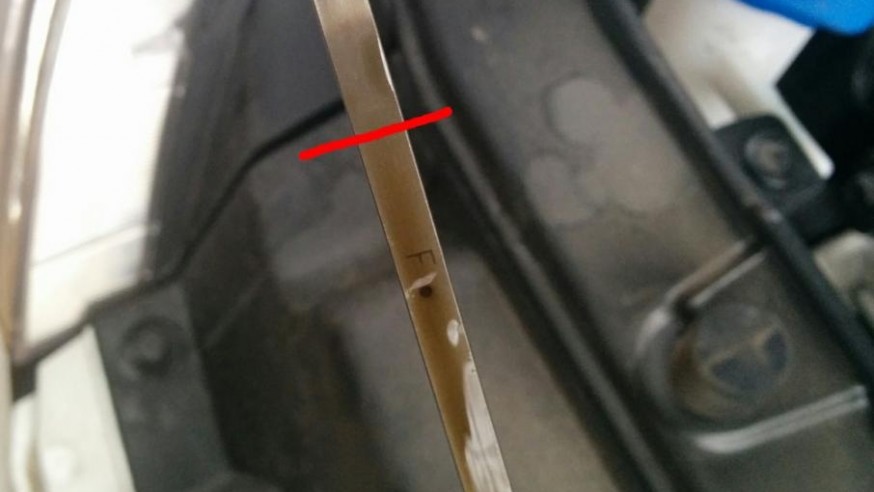 Indications of Too Much Oil in a Car

Oil acts as a lubricant in the engine of a car. Having the correct amount of oil is important for having a car run at its best. If the oil is too low, there will not be enough lubricant and an engine can burn out quickly. Too much oil can have a similar effect, as the overflow of oil will be whipped into foam by the crankshaft and leak into other parts of the engine, and it can also lead to low oil pressure. Both outcomes can result in major and expensive repairs being necessary for the car. There are a few good ways to double check that the proper amount of oil is in the car.
Dipstick reading
Warm the engine by driving the car a few miles. Proper engine warmth is important to accurately read the amount of oil, as oil expands as it warms. If oil is filled in a car that is cool, once it warms the oil will expand and cause overflow. Once the car is warm, using a dipstick is the most common method of checking the amount. Essentially, the dipstick is a metal rod that is dropped into the oil tank and removed. There will be two marks on the dipstick, one for the low level of oil, and one for the high level. It is important to always be between these two lines.
White Exhaust Smoke
If thick, white smoke comes out the exhaust pipe, this can be an indication that there is too much oil in the engine. Taking the car to the mechanic immediately is important to minimize the likelihood of permanent damage being done to the engine block. The white smoke is generally an indication that something in the engine is burning, while it may not be oil, if the oil is overflowing and churning into foam, it may start to burn, which would cause the white smoke. This may also be antifreeze burning, so it is best to take the car to the mechanic, because any of the causes of the smoke can be disastrous for the car.
Leaking Oil
Residual oil can leak from the engine, and end up on the floor beneath the vehicle. Since oil is often spilt when adding it to the engine, if oil is seen beneath the vehicle in the same spot it was added, it may be nothing. However, if there is oil found beneath the vehicle after it has been moved, then it may be leaking. Checking the oil plug beneath the car is important to make sure that the oil is not leaking from there as well. If the oil plug is loose, then the oil may not be overflowing, but rather draining from the bottom. In this case, your car will run out of oil too quickly, which also causes problems.
If you are a vehicle enthusiast and your vehicle has some other problems, why not buy vehicle diagnostic tools from our website, and then diagnose auto malfunctions all by yourself. These vehicle diagnostic tools are: Autel MaxiDAS® DS708, Autel MaxiDiag Elite MD802, Autel MaxiSys MS 908, and so on.

Previous PostHow to Troubleshoot Windshield Wipers
Next PostInspect Your Brakes