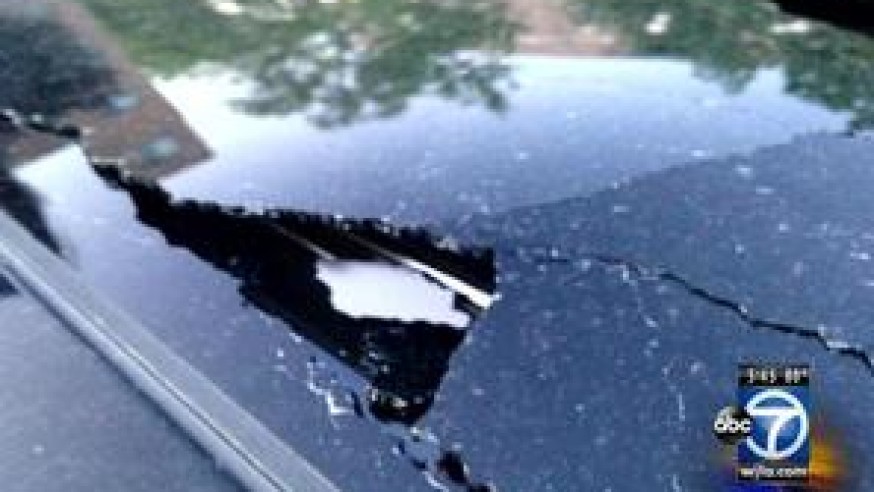 Exploding sunroofs are more common than you might think

ALEXANDRIA, Va. (WJLA) – There is a danger looming over some drivers; exploding sunroofs are a more common problem than many people realize.
Continue reading
Kate Vasiloff is a D.C.-area transplant, missing the perks of home.
“I’m a Florida sun baby, so I love the sun,” the Arlington resident said.
Vasiloff can still catch her daily rays in Virginia, thanks to her sunroof.
But a May shower ruined her drive; it wasn’t rain that started falling—it was glass.
“All of a sudden, we hear what sounded like a gunshot and had no idea what it was,” Vasiloff said.
Vasiloff says her sunroof spontaneously exploded as she sat at a stop sign in Washington, D.C., shattering the glass.
“We knew we didn’t hit anything. We knew nothing had hit us,” she said. “It’s such a random thing to have happen.”
But it happens more than you think. ABC 7 News dug through National Highway Traffic Safety Administration records and found hundreds of complaints about exploding sunroofs. Owners of various makes and models reported having been unexpectedly showered with glass; some were even injured by it.
“It’s not supposed to happen, and I didn’t think it could happen,” Vasiloff said.
When a sunroof spontaneously explodes, everyone wants to know the cause. But it’s a mystery that can be tough to crack.
Experts tell ABC 7 News there is no definitive way to tell what shattered a sunroof, unless you’ve got a rock as your smoking gun. But they say the way the glass shatters can provide some clues.
“If the flat glass at the edges of where it’s broken are curved up, that indicates something internally caused the glass to break—a defect in the glass,” said Pete Daly, the president of Paymer & Phillips Auto Repair in Laurel, Md.
In his 20 years in the sunroof repair business, Daly has seen plenty of these defects. He says techs at his shop fix blown-out sunroofs on a regular basis, many of them from customers that claim explosions.
“It doesn’t matter what make or model or what sunroof manufacturer—they all have these problems,” Daly said.
Still, exploding sunroofs are known to be more of an issue for some makes and models than others. In the last two years, both Audi and Hyundai have recalled thousands of cars because of sunroof issues that could send glass falling onto drivers. Aftermarket manufacturer Webasto recalled hundreds of thousands of sunroofs, out of concern they could spontaneously break.
Vasiloff’s sunroof was original equipment that’s since been fixed. Now, she’s back to catching rays behind the wheel.
“I use it like nothing happened,” Vasiloff said. “I’m not a live-in-fear kind of person. It might happen again, but I figure lightning can’t strike twice.”
NHTSA has been looking into reports of exploding sunroofs. In May, the administration upgraded an investigation into the problem tied to Kia Sorentos, but so far there have been no recalls on that car.