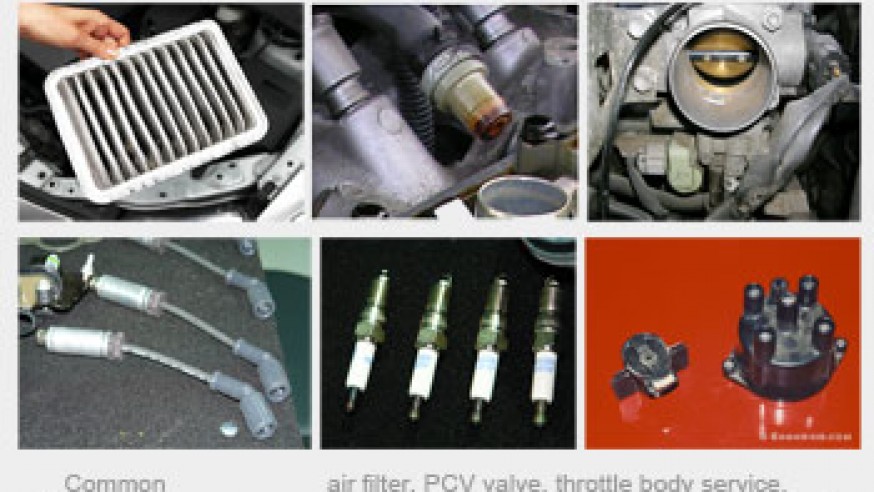 Getting a regular tune-up
If your engine feels sluggish, lacks power, misfires or runs rough, a good tune-up often can make a notable difference. A tune-up is typically done every 60,000-90,000 miles. In newer cars, a tune-up may include changing the spark plugs, air filter and possible cleaning the throttle body. In older cars, distributor cap and rotor, ignition wires and fuel filter may also need to be replaced. Often, your mechanic may suggest cleaning the engine throttle body, as when it’s dirty, it can cause rough idle and the Check Engine light coming on. A PCV valve may also need cleanng or replacing. A fuel injection cleaning service is another often suggested tune-up item, where a special cleaning solution is run through the fuel injectors while the engine is running. In a high-mileage engine, cleaning the fuel injectors may help improve gas mileage and restore some of the engine power. This service could cost $100-$160. However, if your car is fairly new and has only 30,000 miles or so, cleaning the fuel injectors won’t have much effect.
When your timing belt or chain needs to be changed
A timing belt synchronizes the crankshaft with the camshaft, so that valves operated by the camshaft open and close in sync with piston movement. A timing belt should be replaced at recommended by the manufacturer intervals; usually from 60,000 miles to 105,000 miles (96,000-168,000 km). A timing belt may also need to be replaced if it shows signs of wear or is soaked in engine oil. If the timing belt breaks, your car won’t be driveable. In some cars, if the timing belt breaks while the engine is running, the engine could be severely damaged. If you don’t know when the timing belt was replaced last time, ask your mechanic to check its condition; usually it’s easy to check if the timing belt is in good or bad shape. Replacing the timing belt can cost $200 to $750. Not all cars have a timing belt; many car manufacturers use a timing chain instead. A timing chain does the same work as the timing belt with the difference that the chain is running inside the engine, lubricated by engine oil. If you do your oil changes regularly, a timing chain can last very long. It may only need to be replaced if there is a problem with it; for example when it’s noisy or stretched.
Maintenance tips for turbocharged engine
A turbocharger pumps more air into the engine boosting the engine power without increase in the engine volume. A turbocharger is powered by very hot exhaust gases, but the turbine shaft is lubricated by engine oil. This means that engine oil in a turbo engine must be capable of withstanding much higher temperatures. For this reason, premium synthetic oil is the most suitable for a turbocharged engine. If you turbocharged engine uses mineral oil, make sure to have the oil changes done regularly, as mineral oil carbonizes much faster in a turbocharged engine. When you stop a turbocharged car after hard driving (speeding, towing, etc.) don’t shut the engine off right away; let it idle for a while to cool down the turbocharger. Very long uphill driving under constant load can also overheat the turbocharger.
Oil additives
Oil additive is a controversial topic and while some people swear by them, car manufacturers usually don’t recommend using any additives in their cars. Over the years we had tried several products in different engines. From our experience, some oil additives showed very little effect, but others actually worked well. For example, we had a four-year old Honda Accord that was consuming a lot of oil between oil changes. Since the engine overall was in a good shape, we suspected that the oil rings were stuck in their grooves due to carbon build-up. We tried an oil additive that was said to help free sticking oil rings; and it actually worked. After this, the car did not consume any oil between the oil changes.
Change your air filter in recommended intervals
An engine air filter prevents dust and other debris from entering into your engine. A dirty air filter can restricts air supply to your engine, causing sluggishness and lack of power. An old air filter can actually collapse or rip through, allowing unfiltered air, dust and other debris into the engine, causing it to wear faster. An air filter is typically replaced every 15,000-20,000 miles or more often if you regularly drive on unpaved or dusty roads. Replacing the air filter can cost $30 to $60. Many DIY car enthusiasts change an air filter at home; in most cars, it’s actually not very difficult.
Change worn engine drive belt(s)
A drive belt runs an alternator, air-conditioner compressor and other accessories attached to your engine. Some cars have only one drive belt, others may have two or three belts. Over time, a drive belt wears out; squeaking is the first early sign that a drive belt needs to be checked. An extremely worn or cracked drive belt may break disabling your engine. Typically, a drive belt is inspected during an oil change service. If a drive belt shows signs of wear or cracks, it needs to be replaced.