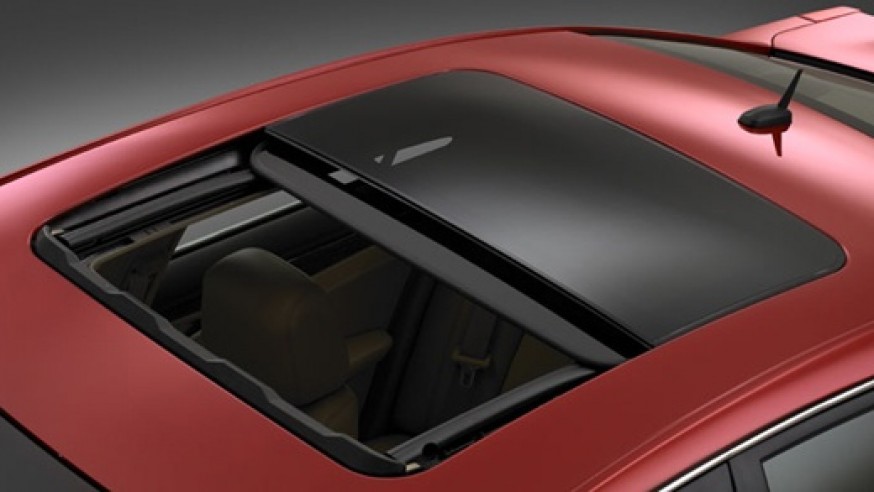 An automotive sunroof is a fixed or operable (venting or sliding) opening in an automobile roof which allows light and/or fresh air to enter the passenger compartment. Sunroofs may be manually operated or electric driven, and are available in many shapes, sizes and styles.
Sunroofs, by historical definition, are opaque. Most factory sunroofs offered today feature a glass panel, and are often referred to as moonroofs, a term introduced by Ford in the 1970s.
Manual sunroofs may be lever actuated, as in venting type pop-ups, manual lever or crank operated for sliding systems. Electric roof systems are usually cable driven by a motor and feature some form of sliding opening. Most moonroof systems today are electric and have either a combination pop-up/inbuilt or a pop-up/spoiler configuration.
Roof systems may be original equipment, factory options (provided by the car company), or installed aftermarket by a roof installation professional for the car dealer or retail customer. Once the vehicle leaves the assembly line, the factory option can no longer be integrated into the roof, making aftermarket the only option.
The wind in your hair, the breeze on your face, no matter how you want to describe it, sunroofs give you a great option for feeling the outside air. However, at the same time, the sunshine shines directly in, so the questions comes along-do the sunroofs and moonroofs in cars provide UVA and UVB protection, or should people with skin cancer stay away from them?
In the United States, automotive glass must meet certain federal standards such as the requirements for visibility, but there are no such general standards for sun protection. Actually, sunroofs are often made to block about 90 percent of UV rays. Even so, you’d better apply a sunscreen with an SPF of 15 or higher a half-hour before you drive. If you have thinning hair, wear a hat to protect your scalp.
Sunroofs are available in many shapes, sizes and styles, and are known by many names. According to their design features, here we’ll talk about seven types of them. We’ll proceed on by one.
We’ll begin with pop-up sunroofs. To be simply put, a pop-up sunroof is a manually operated tilting glass panel. Its tilting action provides a vent in the roof, or a full opening when the panel is removed. It can be installed in most vehicles with a relatively low price.
Then comes the spoiler sunroofs, or known as tilt and slide sunroofs. They tilt to vent, and slide open above the roof, requiring little headroom or roof length. Because of this feature, spoilers are ideal for short roof vehicles where other types of sliders can’t be installed. Thus, they don’t offer a very large amount of opening like many other sunroofs do, but they make up for it with a self-storing panel, which you’ll prefer for the added convenience.
Next will be the inbuilt sunroofs. Inbuilt sunroofs slide inside the roof, and provide a full opening in the roof at the cost of some loss of headroom. Inbuilts don’t fit every vehicle since the panel must slide and store completely within the vehicle roof. In fact, they are originally a metal panel painted to match the vehicle roof.
After the inbuilt, follows the folding cloth sunroof, also called rag-tops or cabrio coach. Folding cloth sunroofs are available in both manual and powered versions. If you like a large opening and open-air driving, then this is the sunroof choice for you. As it folds back as you open it, revealing a gigantic space for open-air driving.
The fifth one will be top-mount sliding sunroof or rail mount topslider. Originally popular in Europe, the top-mounted sliding sunroof has gained steam in America as well. A large glass panel slides open in tracks on top of the roof, with no loss of headroom. Most feature an integral wind deflector to eliminate wind noise.
The following one is panoramic sunroof. It is a new type of large or multi operable or fixed glass panel sunroof which offers a much larger viewing area than other automobile sunroofs.
Finally we’ll introduce removable roof panels. Removable roof panel provides a wider opening by opening a roof to the side windows. It includes T-roofs and targa roofs. T-roofs have two removable glass panels, and leave a T-shaped structural brace in the roof center while targa roofs include only one and leave no cross brace.

Previous PostWhat is Brake-by-Wire?
Next PostWhat Is a Power Window?